In this video, I discuss the core schizoid wound and summarise the steps of the trauma recovery.

Encounters With the Unconscious - Part 1 [Video]

Thoughts on how to live in a balanced relationship with our unconscious and the significance of self-awareness in the path of growth and development.

How to Stay Committed to New Year's Resolutions

The more work you put into organising and planning your goal, the bigger your chances that you will succeed - and the less work it will take to get to your destination.

Learn how to: Learn more

Many films have been based on archetypal patterns discovered by C. Jung. For instance, Fight Club and The Double deal with the issue of transformative shadow possession where the ego must embark on a journey of transcending a comfortable but rather fruitless attitude to life and is pushed towards taking steps necessary to win the power struggle against its shadow.

The hero myth or a hero's journey, as one of the most popular archetypal patterns of transformation, has been presented in many different lights, accordingly to the culture and the current social condition. It does, however, always follow the number of precise stages, as described by J. Campbell:

1. Departure - an individual is called to an adventure (by the unconscious forces), perceives signs or symbols that intrigue him, might meet a mentor who offers a guidance. At this stage, he is still within the regular, conscious world.

2. Initiation – crossing the boundary between the conscious and unconscious, encountering various trials, meeting with the goddess / powerful female figure, resolving conflicts with the father, getting some sort of reward or simply finding what one was looking for

3. Return - coming back to the world, resurrection, bringing back the gift one has received in the underworld.

This pattern is commonly interpreted in a positive way – the hero brings light to the world and changes it for good. However, this has not always been the case, especially for the hero himself. Take for instance, the journey of Prometheus who by bringing knowledge/light to people got severely punished. Although the gift or a reward has been positive for the collective, it demanded a tremendous sacrifice from the one who was brave enough to rebel and undergo this journey. Such was the case with many historical figures who sacrificed themselves whilst sharing their gift with the humanity. However, it wasn't just a mere sacrifice and most likely, the hero wouldn't see his journey through such lenses. Rather, it was an act of rebellion against the established status quo of what is right and what is wrong.

The very same, notable pattern is also present in Blade Runner 2049 and I will illustrate stage by stage how K embarks on the journey of a hero, permanently transforming the collective of replicants.

On the beginning, everything is in place - K (R. Gosling) does his job, he has a loving relationship. His world is in order. However, He doesn't fully fit in - he doesn't have a soul, as Lt. Joshi (R. Wright) keeps emphasising. How long one could keep going like this, living as an outcast, lacking 'depth'? The whole world, in fact, has been plunged into the abyss of dystopia and nihilism. Nobody challenges the current order in fear of repeating the rebellion lead by replicants many years ago.

This emptiness, lack of substance or passive attitude in one's life is very similar to what has been portrayed in Fight Club when the narrator, despite having his life in order, couldn't settle and feel content – couldn't even fall asleep. In such situations, the unconscious makes its callings and comes to the rescue. K discovers a dead female replicant who gave birth in the past. The order is upset. He's intrigued, wants to go deeper. Could it be that something could be born of this 'soulless', unconscious realm? The unconscious calls for him not only through these physical clues, but also through the voice of a replicant he killed: "You've never seen a miracle".

Whilst on a threshold between the conscious and unconscious, his anima both, supports him and tries to stop him. The anima here possesses a dual aspect: one represented by Lt. Joshi - rather tyrannical, tough, desiring to maintain order; the second, represented by K's girlfriend, Joi, who is quite delicate, supportive and loyal. One aspect pulls K into creativity and stepping into the unconscious (supportive), the other is about keeping an order and forgetting about 'uncomfortable' facts.

Both aspects of his anima are personified - Lt. Joshi exercising authority over K, and Joi becoming literally personified when K provides her with the device that enables her hologram to regain more independence. In general, if the personification of the anima occurs, it is because the man overidentifies with his persona (external world) and thus, his ego does not possess enough autonomy to direct his life. K is just a machine with no soul.

His encounter with the shadow went rather smoothly - he searches for clues about Rachel (the found dead mother-replicant) in Wallace Company and gets what he needed. He discovers the date on a tree which is precisely the same date as the one carved on a wooden horse-toy he once had. Perhaps he sees Rachel as some sort of goddess - if replicant is born, does it mean it will then have a soul?

He chases the place from his memory. His shadow is still being quite helpful - Luv sends drone attack on the group of people trying to attack K. His unconscious leads him to recover what he once hid - the wooden-horse, the only thing he truly possessed. Now it all seems clear - he's been born out of the unconscious, of unanimated elements (replicants with no soul). In the mean time, his life deteriorates, he is soon to lose his job and is about to be arrested. The ego, chasing the unconscious phantoms, changes its function in the world. The deeper we go into the unconscious realm, the more disintegrated our comfortable lives will become.

His girlfriend, Joi, accepts it and names him Joe - he was born which means that he has a soul and therefore, deserves to have a real name.

The journey continues and all clues have led him to know who his father might be. He embarks to go deeper to the unconscious, under a belief that he is the one that was born, and seeks for his father.

Now, I would interpret it in a way that his father is both, the symbol of a real father and of the self itself. On the one side, he is soon to engage in a short fight with him and then come to a resolution (resolving a conflict with a father, as a stage on the hero's journey). On the other.. I will explain as we progress further. Regardless, perhaps in this case, the father and the self represent one and the same symbol.

Identification with the self leads to drastic consequences, as Jung has warned. By overstaying in the unconscious realm with the self itself, K brings destructive forces from the outside - soon, both K and Deckard are attacked.

In the meantime, lt. Joshi and Joi are killed. The supportive aspect of the psyche (anima) that bridges the unconscious with the conscious is lost. This might again be caused by overidentification with the self or by overstaying in the unconscious realm, whilst ignoring the actual reality.

Deckard is kidnapped whilst K, wounded, is attended to by the rebellious group of replicants lead by Freysa - who was tracking him for quite a while. Another powerful female figure, perhaps the death of his anima gave place for a new, evolved anima to develop. The older anima assisted him in his journey but as he has arrived at his destination, there is no function for it anymore. Perhaps in a way, it has been misleading him. The new anima that has taken an empty space, enlightens him - the memories he's been chasing weren't his. This is a rather drastic journey back to the reality.

His new anima or perhaps some goddess / manifestation of a strong, feminine archetype, teaches him that sacrificing one's self for the right cause will make one more human than humans.

Disillusioned K, possibly on a verge of suicide (although it's only my subjective impression), embarks on a last stage of his journey - bringing the gift from the unconscious. His ego is sufficiently independent now - he is not lead by the commands of his anima, and neither by other unconscious forces.

K rescues Deckard and offers the gift he has received - he leads Deckard to meet his daughter, the replicant who has a soul, the one who was born, rather than made. The self undergoes a full integration of its masculine and feminine aspects. The ego, K, completing his mission, dies. He fulfilled his function.

Does it mean he had a soul, since he sacrificed himself? Or was he a mere machine with a specific goal and function to fulfil? 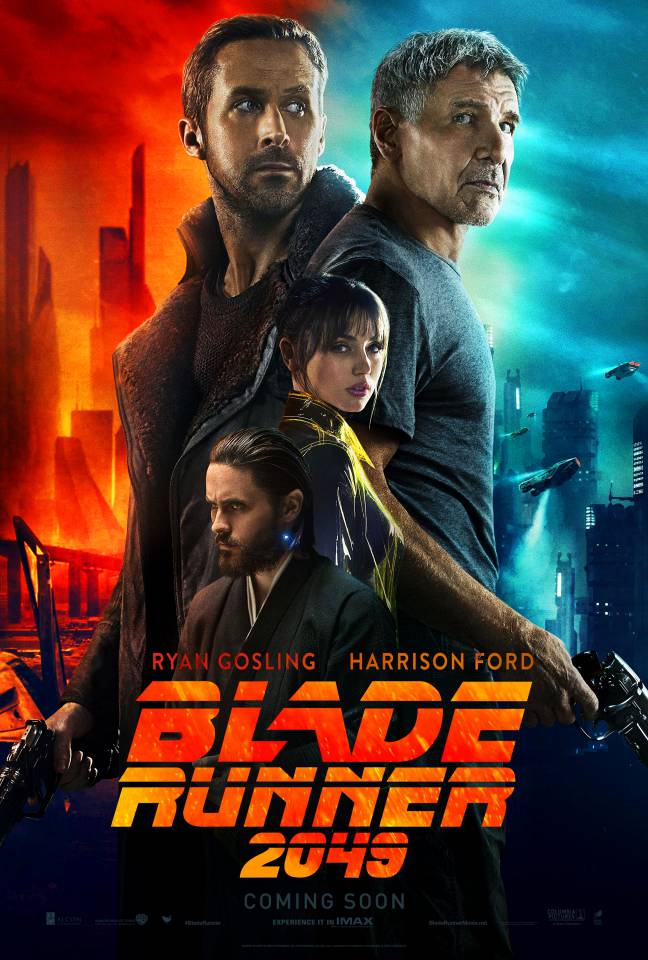 Even the film poster clearly demonstrates the dynamics of the psyche, with the ego being supported by the shadow, and anima bridging the ego (conscious) with the self (the unconscious).

This carefully crafted film provides us with a number of lessons and messages. The first and foremost, rebellion leads to transformation. Rebelling on the personal level increases one's agency where we are free to follow our impulses, hunches, beliefs of what is right. On the collective level, it changes the status quo. In the film, such rebellion was based on bringing the unconscious into the conscious – the actual evidence that replicants can reproduce like humans, and therefore being more than a mere serial number that could be exploited.

Second, the ego is just a tool, although quite an important one. If the ego didn't listen to the unconscious messages and if it stayed in a state of a close identification with the persona (preserving the status quo), one wouldn't really transform anything and wouldn't bring any gifts such transformation might provide.

Lastly, transformation and actualization of the self requires sacrifices – one must let certain aspects of ourselves go in order to create space for what is to come.

What are your thoughts?