The theory of non-playing characters (NPCs) surrounding us sounds rather like a story from a sci-fi film. It will only make sense if you consider that ideas regarding us living in a simulation and conspiracy theories regarding glitches in a matrix be true. As much as I would like to discuss the probability of such ideas being true, what I prefer to focus on in this article is the possible explanation of the NPC phenomenon which, actually, is a very old idea being simply rebranded and adjusted to the modern age.

The theory of NPC has been developed through a comparison of our reality to that of a simulation or simply a game, with an addition of the results from a study which demonstrated that many people don't have an inner dialogue. This could be interpreted in a few ways: first, an overwhelming number of individuals (around 80%!) don't really think (there is no critical thinking, no carefully crafted personal opinions, nothing really going on in their heads); second, many people think in images rather than in words (but that doesn't explain it all; I think mostly in images, but I can't imagine not having any internal dialogue at all); the study is not particularly valid as it was conducted on a very small sample.

In most multi-player (or single-player) video games NPCs are simply non-participating characters – they are a part of the code which runs the game and they are not real human beings playing the game. They have a very limited behaviour and very predictable responses to our interaction with them. NPC can't be anything else beyond what has been written in a code. They are not alive, nor conscious, which becomes apparent only once we (real players) interact with them.

Many people theorize that NPCs are actually among us. The reason behind it is very simple – certain individuals simply display characteristics of NPCs: they are very predictable and their responses are very limited. On the surface, they might seem just like any other individual, but once you interact with them, you will have the experience of talking to an empty vessel – a part of the code that cannot be anything beyond what their code tells them. They might give off a vibe of lacking a soul or consciousness, as if there was no life-energy inside them.

This phenomenon reflects quite important social issues. As much as I would like to believe that we are living in a simulation and that certain people are in fact NPCs (which I don't neglect to be actually true), there are several explanations that we could apply to our experience of interacting with NPCs (or being one!).

First and the most obvious explanation is the prevalence of depression (around 1 in every 25 people) & languishing (at least 1 in 9 people). Languishing has been defined as a state where an individual doesn't meet the criteria of mental health disorder, but they don't meet the criteria for being entirely healthy either. Both conditions, whether it's depression or languishing, will impose very harsh limits on individual's energy levels – such individuals will seem lethargic, dull; their cognitive abilities will not be as pronounced as in someone who is free from depression and languishing; they might seem and feel lifeless and without a drive to strive for their goals.

On average, 1 in every 6-7 people that you meet is either depressed or in a state of languishing. Therefore, it's likely that you will interact with people suffering from these very limiting and painful conditions quite often. On a side note, the studies quoted above are a bit outdated, especially in regards to the percentage of languishing people, so the current number could be higher or lower. Also, we need to consider the possibility that many people will not seek out any diagnosis, regardless if they are depressed or languishing which could obviously impact the quoted studies.

That is not to say that people suffering from either of these conditions could be compared to being NPCs, but rather that people unware of various mental health conditions and the symptoms such disorders produce could misinterpret the signs and rush towards providing misinformed interpretations.

I could have stopped here and considered the depression to be the only cause of the NPC phenomenon, however, I believe that there are deeper sociological issues to consider if we want to examine NPC theory on all levels.

Many of my previous posts focused on the fact that we are a culture of distraction and that we are swimming in the sea of information. Some of us are slowly getting drowned in it. The effects of numbing our brain with this overwhelming number of things that scream for our attention (internet, TV, social media, work, other people) could be comparable to trying to install just one more game on the full hard-drive. No space available.

Nobody knows what the hell are we doing, where are we going, where are we, and what is happening. Do you know? Since there are so many things you could focus on, eventually you don't know what to pay attention to and so you end up not being focused on anything at all. You stop being curious, you stop paying attention, you are tired and you just try to keep your life safe and simple. It's a sad reality of living in the age of abundance of information – since we are often bombarded with conflicting information which our brain can't process any more, we go numb. We keep our head low and just try to get by through another day. Such individual might give off an impression as if nothing was happening in their head any more and that all they do is just following a script: a limited repertoires of behaviours and responses – pretty much like an NPC. 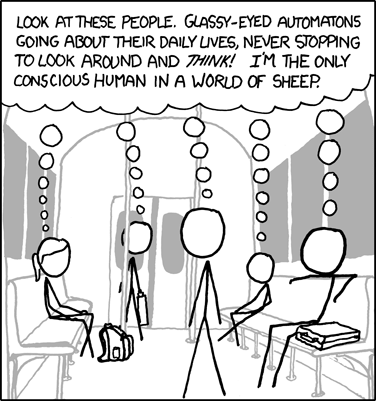 We've become so isolated, so self-centred, so overwhelmed that providing the world with NPC responses seems to be the only way to live for many of us. Such a way of life, however, will not get us anywhere we would enjoy staying for long: it's a life of shallow interactions with people, disappointment and aimlessness. Clearly, for many people the world goes too fast – too many things to do and too many material goods to choose from. It's understandable that many people simply get lost.

For the most part of our human history, religion and spirituality provided humanity with meaning and comfort. Through a development of a system of various rituals that helped people to feel connected with nature, supernatural powers, or god, people could develop not only their external lives, but also their spiritual, internal world. It filled their lives with meaning which is absent for a lot of individuals these days who feel disconnected not only from others, but also from their spiritual self and the nature around them. As pagan as it might sound, there is more to life than just superficial relationships and chasing for narcissistic supply. This lack of spiritual development could be another contributor to the NPC phenomenon.

I heavily doubt that we are the first society ever to experience this NPC phenomenon. The philosophy of nihilism and spiritual emptiness has been already explored centuries ago; the concept of emptiness has been also closely studied by Buddhism for thousands of years. This phenomenon is nothing entirely new or completely absent from the human history in a general sense. We've simply taken a philosophy that has been closely following humanity for centuries and adjusted it to the modern age of technological development. Alternatively, we are truly living in a simulation and certain individuals are in fact NPCs having no soul and no conscious awareness. Who knows!